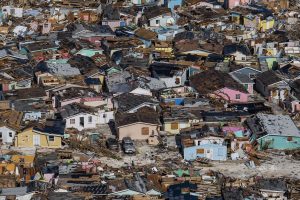 Between September 1-3 , Hurricane Dorian stalled over the northern Bahamas was one of the strongest storms in Atlantic history. Till September 10, the death toll was atleast 50 and was expected to increase as research and rescue operations continued.

Sen. Rick Scott stated that it was important Customs and Border protection and the Bahamian government work together to clarify the current rules regarding visas in the Bahamas. U.S. Sen. Marco Rubio co-signed the letter.

The Bahamians were seeking refuge to start or rebuild after Hurricane Dorian so they cannot have the kind of confusion that happened last night in Freeport.

On September 8 hundreds of people boarded a ferry in Freeport destined for Port Everglades in Florida and were told to get off the boat if they did not have entry visas for the U.S.

Sen. Rubio continued to urge President Trump to waive some visa requirements for those in the Bahamas that have family in the United States. But until that happens there should be a clarity on the current rules.

There is a deep historical tie between Florida and the Bahamas and because of proximity many Floridians have family in the Bahamas.
Floridians were eager to help family and friends in the Bahamas as it avoided a direct hit from Hurricane Dorian.

Scott went on saying that he encourages Customs and Border Protection to work with the Bahamian government to set up a temporary site at their ports of entry.
There should be professionals to help the many Bahamians trying to levae destruction.
There were proposals to help families in Bahamas recover and include a change in the U.S. Tax Code to incentivize charitable giving, continued deployment of U.S. Coast Guard and other U.S. entities in providing humanitarian assistance along with a redirect of foreign aid away from countries he said are the adversaries of the U.S.and put that aid toward the Bahamas recovery efforts.

A Democratic state lawmaker, Rep Shevrin Jones said regarding the situation with the ferry in Freeport that many people lack all the documents due to the storm.
The Bahamians required a temporary place to regroup and according to the U.S. State Department guidelines most individuals traveling to the United States require a visa but that some individuals may travel without a visa on the Visa Waiver Program.

At the Nassau or Freeport International airports, Bahamian citizens meeting the requirements may apply for admission to the United States without a visa at one of the U.S. Customs and Border protection pre-clearance facilities.
But in case of emergency situations the pre-clearance station hours of operation may change.