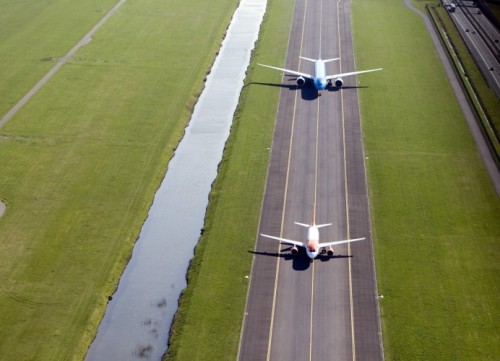 The decrease in the number of cargo movements continued, with 17.5% fewer cargo aircraft using Schiphol than was the case in June last year. There was a fall in the average cargo load this month, which resulted in a 13.7% decrease in cargo volume.

June saw 4.7 million passengers travelling to and from European destinations (+2.2%). Poland and Austria are destinations that are soaring in popularity (20% growth). Traffic from and to Turkey increased by 11%, as a result of growth to Antalya (+26%). The traffic to holiday destination Spain remained virtually the same, Italy showed 4% growth and Greece dropped in popularity among passengers departing from Amsterdam Airport Schiphol (-5%).

In June, Schiphol welcomed 1.9 million intercontinental passengers (+1.4%).Traffic to Dubai and Doha, on the other hand, increased by nearly 20%. Traffic to the United States grew by over 7% thanks to both expansion of the network (Las Vegas and Tampa) and intensification of the routes offered (New York JFK, Detroit, Los Angeles, San Francisco and Boston). As a result of the closure of Jet Airways, transport to India decreased by 64%. Caribbean destinations Jamaica (-46%) and Cuba (-33%) declined in popularity.

Over the first six months of 2019, we could see a slight decrease in the total number of air transport movements (-0.1%). The portion of passenger movements increased at the expense of cargo flights. This is reflected in the volumes: thanks to the deployment of larger aircraft (on average) and a virtually stable load factor, +0.4% additional passenger movements have yielded passenger growth of +1.4%. Cargo, in turn, saw 14.4% fewer movements than in the first half of 2018. The load factor dipped somewhat as well, resulting in a decrease in cargo volume of 9.2%.

Click here for the complete overview of traffic and transport figures for June 2019.

#MeetTheMembers: @aeroflot takes us back to the glamorous days of travel with th…