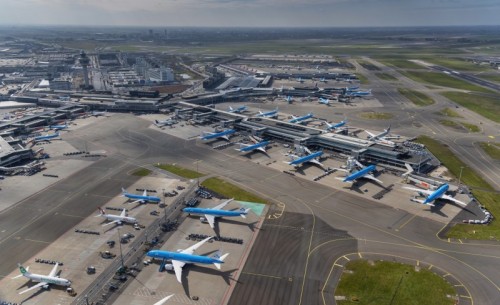 An increase in the number of full cargo flights mainly took place towards North America and Asia. The number of additional full freight movements to North America amounted to more than 275 flights. More than 250 additional flights to Asia took place. Nevertheless, the total volume of cargo transported declined by -26%, as it does not fully offset the freight normally carried in passenger aircraft holds.

Please click here for a complete overview of traffic and transport figures for April 2020.

The impact of the corona virus can be seen in dwindling traveller numbers and flight movements across the entire aviation sector. The decrease in traveller numbers and cargo volume that happened in April is not expected to change significantly in May. Schiphol will continue to operate at a smaller capacity in order to continue connecting the Netherlands to the rest of the world.

Our #FlyingArtSeries #Dreamliner in #HongKong resting before her return to #Aust…

The #Boeing #707 was the #aircraft that started the #jet era. Who can tell us ho…