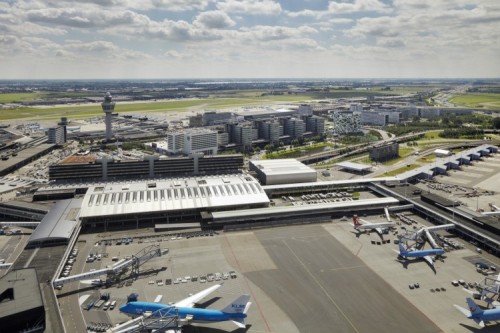 Relative to comparable European hubs the growth in the number of passengers at Amsterdam Airport Schiphol is slowing. There was a slight growth of 1.4% to 34.5 million (HY 2018: 34.0 million, 5.5%). The number of air transport movements at Schiphol edged down by 0.1% to 242,107. Cargo volumes showed a decline of 9.1% to 767 thousand tonnes. This was driven by fewer cargo flights because of slot scarcity at Schiphol as well as a result of a weakening of the global air cargo market.

In the first six months of 2019, Schiphol invested 336 million euros to improve customer experience and operational efficiency(HY 2018: 232 million euros). Among other things, Schiphol invests in the development of a new pier, the redevelopment of Departure Hall 1, a seamless flowfor passengers, and new equipment for scanning hold and hand baggage. Despite these investments, on a number of occasions, we failed to deliver the level of customer service we aspire to and which our passengers expect.

At Amsterdam Airport Schiphol and Eindhoven Airport passengers suffered from a malfunction in the baggage system. There were also disruptions in the kerosene supply system at Schiphol that caused substantial inconveniences for passengers and airlines. An independent review has been commissioned by Schiphol and AFS, to investigate the cause. Schiphol and its aviation partners are committed to learn from these incidents and improve performance .

Despite these issues, overall, in the first half-year passenger appreciation increased. The Net Promotor Score, which measures the appreciation of passengers, rose from 32 to 35 at Amsterdam Airport Schiphol.

Other key developments in the first half of 2019

• In July the government decided that moderate and controlled growth of Schiphol is possible after 2020under the condition that the number of severely hindered local residents decreases.

• The opening of Lelystad Airport on April 1, 2020 is postponed due to legal issues with nitrogen depositionwhich affects all major infrastructural and agricultural activities in the Netherlands. The minister ofInfrastructure and Water Management declared to aim for the fastest possible opening.

• The total number of passengers at all the airports of Royal Schiphol Group grew by 2.2% to 38.7 million (HY2018: 37.8 million). Passenger volumes increased further by 8.9% to 3.2 million at Eindhoven Airport and by8.2% to 954 thousand at Rotterdam The Hague Airport.

• Although Schiphol continues to be Europe’s second-best connected airport in the direct connectivityranking, it has dropped from second to third place in the ranking of transfer airports with the bestworldwide connectivity. This drop was caused by the cap of 500,000 flight movements per year, which hasnow been reached.

• Amsterdam Airport Schiphol and Eindhoven Airport achieved 3+ status in the ACI’s Airport CarbonAccreditation benchmark for the sixth consecutive year. The airports of Schiphol Group are carbon neutraland, together with their sector partners, are committed to operating zero-emission airports by 2030. The energy used by Schiphol Group is fully generated by Dutch wind. In addition, Schiphol invests in electric bustransport, electrical equipment such as e-GPUs and solar panels.

On the right of this page all information is available to download (PDF).

Something sounds good here If you’re travelling through T3, why not check out t…