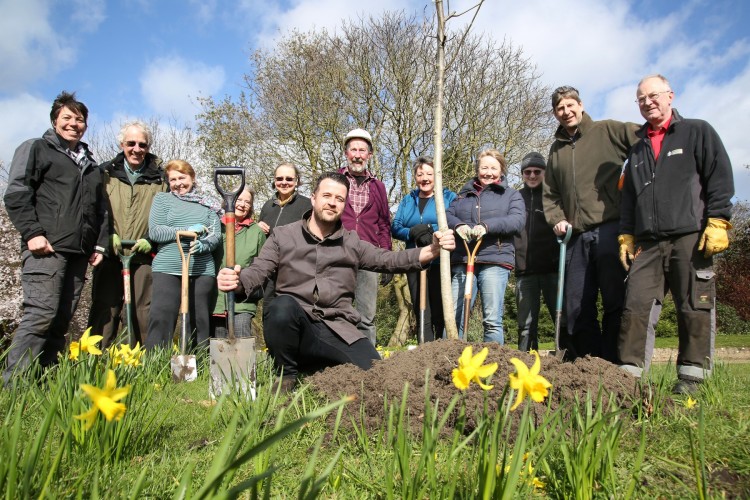 The Friends of Nottingham Arboretum applied to the airport’s Community Fund and were awarded a grant of £1600.

The planting will create a new nuttery and orchard of fruit trees on land that was originally a rose garden. The new trees will also provide shade and form part of a new dedicated family picnic area as well as attracting wildlife. The park currently boasts 830 trees representing 220 species and varieties.

The Arboretum, which opened in 1852, is Nottingham’s oldest public park and is rumoured to be the inspiration for J.M Barrie’s Neverland. It is managed and maintained by the Friends of Nottingham Arboretum – who have been its custodians since 2004.

Dr Graham Piearce, a member of the Friends of Nottingham Arboretum, who helped plant the trees, said: “We’re delighted with the grant and hope the area will attract families and children. It would be wonderful for them to learn about different trees and to see how something like an apple can grow from being wild to food that will end up on their plate.”

Adam Greaves, East Midlands Airport’s Corporate Social Responsibility Executive, says: “We’re delighted to support the planting of new trees in Nottingham’s oldest park which will have both social and environmental benefits for the local community. As the UK’s first carbon neutral airport, we have, for the best part of two decades, placed environmental sustainability at the heart of our operations. This project really chimes with our commitment to sustainability. Initiatives such as these are a great example of how a small grant can make a big difference.”

East Midlands Airport’s Community Fund is managed independently by a management committee. The Fund comprises an annual donation of £50,000 from the airport and the money raised from fines imposed if aircraft exceed strict noise limits. Grants of up to £2000 are awarded to projects that have a long-lasting community, social or environmental benefit. To date, over £1.1m has been awarded to 1384 local causes.

Groups interested in applying for funding should visit http://www.eastmidlandsairport.com/community/supporting-the-local-community/charitable-giving/