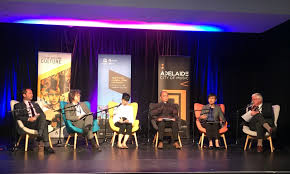 Macao is attending the first Asia-Pacific Creative Cities Conference, which is being held in Adelaide, Australia, from October 23 until 26. Organized as an initiative of the UNESCO Creative City of Music of Adelaide, the conference brought together government officials, cultural and creative industries professionals, and academics, aiming to outline a vision and strategy for the cooperation among the Creative Cities in the Asia-Pacific region. Macao Government Tourism Office (MGTO) Director spoke today (October 24) at the conference, sharing Macao’s experience on a panel that zoomed in on tourism promotion policies and marketing strategies for Creative Cities.

Delegates were welcomed on the first day of the conference with remarks by the Minister for Innovation and Skills of Australia, David Pisoni, and the Lord Mayor of Adelaide, Sandy Verschoor. The Assistant Director-General for Culture of UNESCO, Ernesto Ottone Ramírez, also sent a video recorded message to the event. The Consul-General of the People’s Republic of China in Adelaide, He Lanjing, and other guests also attend the opening of the conference, which attracted around 200 representatives from 20 Creative Cities across Asia-Pacific from all creative fields, including the Creative Cities of Beijing (design) and Shenzhen (design).

The Director of MGTO, and Macao SAR focal point to the UNESCO Creative Cities Network, Maria Helena de Senna Fernandes, is in Australia to attend the event, accompanied by the Head of Training and Quality Management Department of MGTO, Doris Leong. Maria Helena de Senna Fernandes joined today a panel with representatives from cities from other creative fields for discussions under the theme “Label, Product or More? Understanding Long-term Tourism Policies and Marketing Strategies for Creative Cities”. MGTO Director elaborated on how the status as a UNESCO Creative City of Gastronomy has a significant influence on Macao’s tourism policies and marketing strategies. Senna Fernandes explained that the Creative City of Gastronomy narrative has been fully integrated into Macao’s destination promotion, on the city’s tourism products and events, as well as on developing cross-field collaborations, along with initiatives to foster sustainable practices in the F&B and related sectors and more, opening a brand new avenue to help transform Macao into a world centre of tourism and leisure. Representatives from other Asian Creative Cities of different creative fields that also joined the panel came from Baguio, in the Philippines (crafts and folk art); Bucheon, Korea (literature); Sapporo, Japan (media arts); Indian Cluster Office (representing, Chennai and Varanasi – music, and Jaipur – crafts and folk art).

The four days’ program of the first Asia-Pacific Creative Cities Conference features panel sessions, round tables, among others. Aiming to provide a platform for dialogue and to deepen regional collaboration between Creative Cities in the Asia-Pacific, the conference is engaging participants in discussions on how to tap the vast market potential of cultural and creative industries in the region, as well as on how these industries can help create solutions to achieve the United Nations 2030 Agenda for Sustainable Development. Other themed panel discussions included, “Promoting Cultural and Creative Sector Development, Employment, Trade and Investment within the Asia-Pacific Region”, “Securing Sustainable Solutions and the Resilience of Cities through Creativity”, “Indigenous Arts, Language and Culture in the Asia-Pacific Region”, and more. Representatives from Creative Cities will also join internal meetings of the network, along with study tours and creative showcases to experience Adelaide’s culture and festivals.

As part of the plan to develop Macao as a Creative City of Gastronomy, MGTO actively joins events organized by UNESCO Creative Cities Network member cities for exchange, learning and collaboration opportunities. The annual “International Gastronomy Forum, Macao 2020” organized by MGTO, slated to be held next April, will also bring together Creative Cities from around the world, mainly from the cluster of gastronomy. Created in 2004, the fast-growing network is formed by a total of 180 member cities from 72 countries in seven creative fields (crafts and folk art, media arts, film, design, gastronomy, literature and music), including 26 cities in the area of gastronomy.