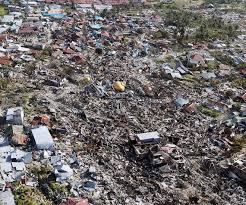 A strong quake destroyed buildings and triggered landslides in the Maluku Islands in the eastern parts of Indonesia Thursday morning, leaving at least 20 people dead in its trail.

“The total number of people who died in the earthquake is 20,” Agus Wibowo, spokesman for the national disaster agency, said in a statement later on Thursday.

Terrified people ran into the streets as buildings collapsed around them in Ambon, a city of about 400,000 people.

“The impact was felt across Ambon city and surrounding areas,” said Rahmat Triyono, head of the earthquake and tsunami division at Indonesia’s Meteorology, Climatology and Geophysical Agency (BMKG).

The area was hit by at least two dozen aftershocks, including one that measured 5.6 magnitude, Triyono said.

Albert Simaela, a local disaster official, told the media that parts of a building at a university collapsed, while a main hospital in the city was also damaged. Patients were evacuated to outdoor tents in the hospital’s yard, he said.

The earthquake was centred 37 kilometres northeast of Ambon at a depth of 29 kilometres, according to the US Geological Survey.

BMKG’s Triyono said the earthquake did not have the potential to cause a tsunami, but witnesses told television stations that people along coastal areas ran to higher ground in fear one might occur.

The national disaster mitigation agency said authorities were still gathering information about the impact of the earthquake.

Up, up and away!  This stunning #AirFrance shot was captured by @mrclemflyspotte…