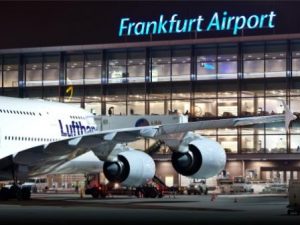 Frankfurt Airport, considered being the hub of German aviation has officially reported a drop in traffic. Similar to various other airports around the world, Frankfurt Airport has also been hit by the global downturn caused by the coronavirus pandemic.

One of the busiest airports in the region, the Frankfurt Airport now stands mostly deserted. At present, only a few limited aircraft are landing each hour in an airport where a stream of different carriers often queued to take off. Many of these current aircraft are mostly carrying essential goods and necessary supplies. Majority of the airline is presently parked in the airport

Various other airports across the globe are facing a similar fate. International travel bans and nationwide lockdown by governments around the world due to the pandemic has caused a major drop is passenger travel demand. As a result, many aircraft have been grounded and airports are emptied.

Frankfurt Airport is also expecting to see a further drop in figures for the month of April. The airport mentioned in an official statement that during Week 15 (April 6-12), traffic at Frankfurt Airport plummeted by 96.8% to 46,338 passengers compared to the same week in 2019.

#MeetTheMembers: @aeroflot takes us back to the glamorous days of travel with th…