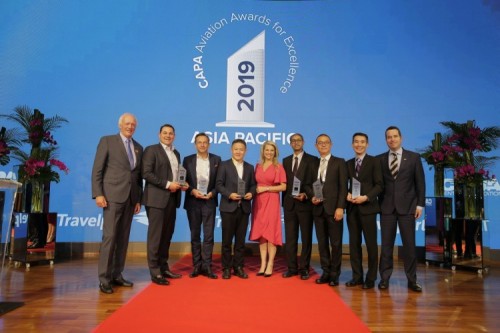 CAPA’s Aviation Awards for Excellence are regarded as the pre-eminent awards for strategic excellence in aviation.

The Asia Pacific Medium Airport of the Year, one of only three airport categories, is awarded to the airport with 10 to 30 million annual passengers that has been the biggest standout strategically, has established itself as a leader, and done the most to advance the progress of the aviation industry.

The judges noted Brisbane Airport’s success in boosting its share of the Asia market by increasing the number of weekly frequencies by 50 to 137 between July 2016 and July 2019 – a critical enhancement for Queensland and its tourism industry, which accounts for 4 per cent of Queensland’s GDP.

BNE was also recognised for becoming a model for airport business development and non-aeronautical businesses such as the BNE Auto Mall, as well as being one of the leading airports in the world for on-time performance.

CAPA chairman emeritus Peter Harbison said, “Applying an important coordinated strategy with Queensland and Brisbane tourism and economic development bodies, Brisbane has become a successful model for airport business development. This has helped achieve a significant growth in international services to the airport, with attendant economic benefits to the city and the region.”

Brisbane Airport Chief Executive Officer Gert-Jan de Graaff said, “It is an honour and a privilege to be recognised by industry experts and to receive the title of CAPA Asia Pacific Medium Airport of the Year 2019.

“Being a great airport is about more than building and managing safe, secure and efficient facilities. It’s also about advocating for our community and passengers and forming collaborative alliances to vie for new services.

“It’s about striking complex and detailed agreements with airlines for more flights, new destinations and the latest aircraft, while funding joint marketing agreements with tourism, trade and government to promote our city and state.

“Beyond commercial endeavours, it is also about being industry leaders in environmental sustainability and participating in world first trials and studies from biofuels to seamless security while being an enthusiastic supporter end enabler of economic, social and cultural life in our city, state and region.

“In my opinion, connectivity is not just about a network of international, domestic and regional destinations, it’s about connecting people, creating communities, and developing opportunities through collaboration.

“Community is well and truly at the heart of what we do at Brisbane Airport and I think this approach sets us apart in the industry,” Mr de Graaff said.

CAPA – Centre for Aviation is the leading provider of independent aviation market intelligence, analysis and data services, covering worldwide developments. The CAPA Aviation Awards for Excellence have recognised strategic leadership in the aviation industry since 2002.

Winners for the awards are nominated by the CAPA global team of analysts for performance over the past 12 months and vetted by a panel of independent industry experts.