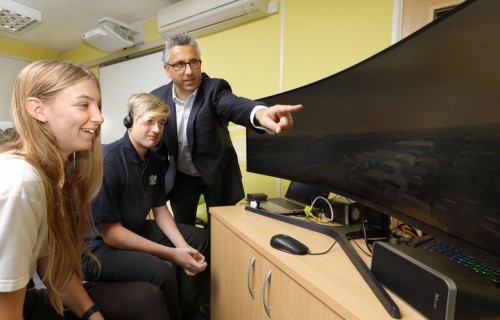 Students from Castle Donington College are among the first to experience East Midlands Airport’s (EMA) new air traffic control simulator – the only one of its type in the UK.

The bespoke portable kit has been designed and built with the aim of taking it to schools and colleges across the region to inspire young people about careers in air traffic control.

The new simulator, which has been developed especially for East Midlands Airport by Micronav Ltd (two times winner of the Queen’s award for enterprise), provides a taste of what it is like to control aircraft at EMA. Under the watchful eye of an expert, students have the opportunity to guide aircraft in and out of the airport under various scenarios. The voice activated system makes for a life-like experience with users having the opportunity to verbally communicate with virtual pilots and respond to changing situations.

The aviation sector is growing at a rapid rate and passenger numbers across the UK have been increasing for seven consecutive years. It is estimated that UK air passenger traffic could soar from 284 million in 2018 to 435 million by 2050. Therefore, the demand for air traffic controllers will increase too.

Typical duties for an air traffic controller (ATC) include:

To be eligible to train as an air traffic controller, candidates need to:

Air traffic services at East Midlands is an in-house team and currently comprises of:

Several members of the ATC team have been at EMA for over 30 years. The team is currently supporting 5 trainees, most of whom have joined EMA from other airports.

The air traffic control tower is staffed 24 hours a day and 365 days a week as EMA is one of the only airports in the UK to offer unrestricted flying 24 hours a day. Many Controllers are attracted to the airport because of its mix of passenger and cargo traffic and its status as the UK’s busiest dedicated freight operation.

Paul Kay, Air Traffic Services Manager at EMA says: “There is a perception that air traffic control is a vocation for the most academic students with a university education. I want to bust this myth. While it’s certainly a highly skilled profession, I want more young people from all backgrounds to realise that it’s a career open to anyone. To succeed, you need a certain attitude and a preparedness to work hard. However, the effort required really does pay off because it’s one of the most fascinating careers to pursue. It’s for this reason that once trained, so many people stay in the profession until they retire and, with many controllers throughout the UK coming to the end of their careers, we need to start inspiring more young people to consider this work as a future career.”

The Airport has partnered with Castle Donington College through the Leicester and Leicestershire Enterprise Advisor network. In addition to working with the school to support their wider careers and enterprise programmes, the airport is supporting 17 students in year 10 to help them become ambassadors for their school and develop invaluable transferable employability skills along the way.

#JewelChangiAirport’s Canopy Park attractions will be open from 10 June! Which o…