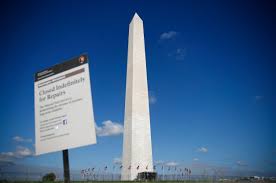 After three long years the Washington Monument is open to the tourists. The 555-foot marble obelisk honouring America’s first president, George Washington, reopened Thursday at 9 a.m. EDT after a three-year renovation project which included an update to its elevator system and a new security screening facility.

Despite being out of commission, the monument still played a role in the capital’s observation of the 50th anniversary of the moon landing in July. Footage of the Apollo 11 mission was projected onto its façade at nightfall.

The monument was designed by South Carolina architect Robert Mills and built by the U.S. Army Corps of Engineers in two phases, the first of which was privately funded.

At 555 feet, 5 ¼ inches, the finished obelisk stood as the world’s tallest structure until it was surpassed by the Eiffel Tower in 1889.

In recent years, the monument has also undergone restoration work to repair damage to its stones and mortar caused by an earthquake in August 2011.

Free same-day tickets for visits through Oct. 18 are available on a first-come, first-serve basis starting at 8:30 a.m. To obtain tickets, visit the Washington Monument Lodge.