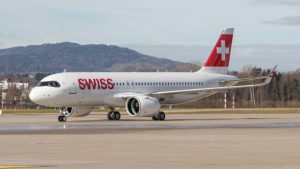 Swiss International Airlines recently received delivery of brand new aircraft A320neo. The aircraft is the very first of the 25 other new aircraft that was ordered by the airline from the A320neo family. The new airbus was launched at a formal ceremony that took place at Zurich Airport in Switzerland.

The freshly arrived aircraft was officially welcomed to the airline squad and named “Engelberg”. The naming ceremony was jointly conducted by Alex Hochli, Mayor, Central Swiss Mountain Resort and Brother Meinrad Haberl of Engelberg Monastery. The occasion was also graced by several other dignitaries from the fields of business, media and politics.

The A320neo aircraft is equipped with the most modern technologies that include a completely new generation of engines, Sharklets that reduce the aerodynamic drag, as well as cabin efficiency enablers. These technologies clubbed together are capable of saving nearly 20% of fuel. The new airbus will consume approximately 20% less fuel as compared to other similar aircraft. The latest aircraft also comes with standard noise-control efficiency. The vortex generators used to reduce the noise would result in a noise footprint that would be half the size of a footprint generated by similar aircraft kind especially during a departing A320neo takeoff.

The configuration and functionality of the new aircraft would further improve SWISS Airlines’ environmental efficiency. Thomas Kluhr, CEO, Swiss Airlines said in a press brief that operating a fuel-efficient Airbus will contribute towards reducing the environmental impact of aviation activities.

The brand new Airbus A320neon also caters to passenger comfort in both Business and Economy class. The advanced seating arrangements offer absolute comfort by enabling pressure distribution over the backrest and seat cushion. The literature pocket has been placed horizontally above the seat table allowing more personal space for travellers.