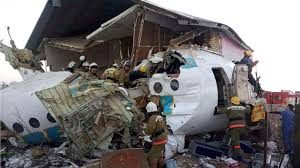 On Friday atleast 14 people died and many injured after a plane carrying 93 passengers and five crew members crashed near Almaty airport in  Kazakhstan.

The Kazakhstan’s civil aviation agency said that the Bek Air plane had lost altitude during takeoff and broke through a concrete fence before hitting a building.

Almaty International Airport said that there were 14 people who got killed at the site of the crash and 22 suffered injuries while two were taken to the hospital.

So far eight children and five adults were being treated for injuries and a special commission was investigating the circumstances that lead to the deadly incident.

Several rescue personnel were digging through the wreckage of the  Bek Air aircraft in the image posted on the social media.

Hundred aircraft of Bek Air was scheduled to leave Almaty at 7:05am local time (01:05 GMT) and arrive in the capital, Nur-Sultan (formerly known as Astana) at 8:40am (02:40 GMT) on Friday according to Flightview.com flight tracker.

In the Kazakh language the president was quoted as saying that all those injured will be rendered assistance. All those responsible will carry severe punishment in accordance with the law.

In 1996 the company manufacturing the aircraft went bankrupt in 1996 and the production of the Fokker-100 stopped the following year.

The authorities went on saying that all Bek Air and Fokker 100 flights in Kazakhstan were suspended pending he investigation of the crash.